Tracking System Solutions For Smooth Operators: From Beyonce to the BBC

TED –   (Tango.Electronic.Drive) The new compact precision tracking system at Hothead Minicams  – is small enough to blend into the most minimalist stage

sets. And they’re also precise enough to do memorised repeatable dolly moves for special effects green screen plates on location and in studio.

Whether the shot is low angle tracking on the floor or hanging from a truss high above a stage TED is equally at home the right way up or upside down at speeds from 0.0005m/s to 1.5m/s over fibre or wireless.

The audience sees what they’ve come to see: a band and screen content, with not a lot else to distract them.

Our tracking systems and mini tower cams create the motion parallax that give images the depth cues we use to create the subconscious perception of three-dimensionality with engaging 2-D imagery.

Precise control of acceleration/deceleration and speed control via pedals or joystick is simple and intuitive, as well as being infinitely repeatable due to programmable memory positions to 0.05mm accuracy.

This summer we were asked to provide three remote cameras for Snow Patrol’s homecoming gig at Belfast’s Ward Park. So we started to design a new, more minimal support rig for our TED tracking system, as well as modifying our Mini towercam into a Midi towercam to make it 1.2m taller. Lastly we put a hothead in the truss above the stage to shoot a top shot of the band.

These custom designed rigs ensured each of the cameras fit into the band’s and director’s vision of what the stage should look like whilst getting the shots director James Russell and DoP Nick Wheeler had designed for the film. They had worked with Snow Patrol over many years and wanted a beautiful 4Kp50 capture for a future-proof final cut. The on-stage tracking camera was a Sony F55 with Zeiss 15.5-45 LWZ zoom, being recorded externally on an Atomos Shogun Inferno via 12G fibre (due to the camera position preventing on board media changeover during the show which was over 2 hours). 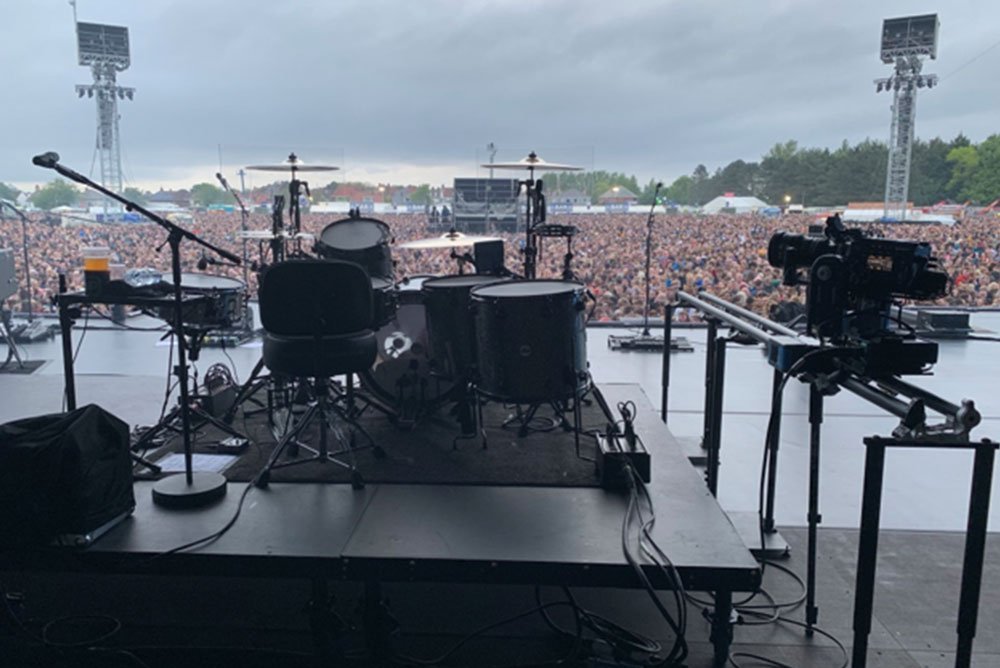 With only one hour to go before the headline act we were told there was a maximum of only five minutes between the support band finishing – and the start of Snow Patrol’s performance to get our complete tracking system off stage and then back on in order to get the Snow Patrol drum risers on stage.

Fortunately the rig we had designed was light, portable and modular, so very easy to move.

We separated the track into two sections and walked the whole system off stage to allow the new drum risers to be slid on. Then we came in right behind the drum kit riser and in four minutes we were rigged and ready. Our ‘Hothead Silhouette’ fibre system designed by Bluebell Opticom transports power, RS485 data and 12G SDI video in one thin hybrid duplex fibre cable which made connecting the entire system instantaneous.

Challenges like these need to be completed successfully to get the type of shots we all want to see, close to the band and in the middle of the action.  Job done!

About the Author: Chris